As an herbalist who has studied primarily with a First Nations teacher, Choctaw elder Karyn Sanders, I can’t let this day pass without an acknowledgement of the brutal legacy of Colombus and the importance of celebrating Indigenous resistance and resilience.

This country was built on bloodshed.  Recently, I wrote about the legacy of Cotton and it’s connection with the enslavement of Africans and African Americans.  Many places in the United States celebrate Columbus Day on October 14th this year.  I have followed the leadership of many indigenous people in shifting my language and naming this day indigenous peoples day.  I invite you to consider this re frame as well.

As a queer person, I know that names and language are important.  And getting the words right mean little when there’s no action. So how can those of us who are non-native herbalists and people who love the earth honor Indigenous Peoples Day?  Here’s some ideas: 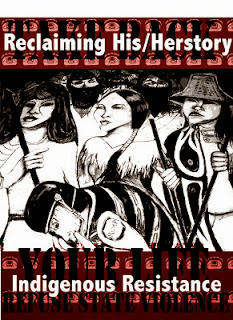 US History textbooks have lied about the legacy of genocide in this country for generations.  Dominant culture continues to spread lies and mistruths about Native Americans.  A key way that the genocide continues is through an erasure of Native American identity.  Even some progressive discussions of American history can contain undercurrents of “and all the Native people are dead now”.  Western Herbalists often talk about how “Native Americans used to use this plant in this way…..”.  Can you see how this approach erases the existence of current indigenous people and their practices?  It’s important to know this history and to recognize that there are First Nations people that have survived the genocide and are fighting for their continued survival.  See a link below for a video about the Taino people (the tribe on who’s lands Columbus landed) and efforts of these people to reclaim and/or be recognized as indigenous people.  Do you know who’s land you live on?  This website does a pretty good job of capturing the history of land in the US and can help point you in the right direction of the people you want to connect with locally.

2) Radically reconsider your wildcrafting practices and connections with colonization

When I first started studying with Karyn one of the first things she taught me is don’t harvest a plant until you have known it’s community  for 7 years.  I have been sitting with this teaching over the years.  One of the things I have learned through this teaching is that plant populations shift and change over the years.  Sometimes a community of plants that you meet for the first time that appears to be thriving is actually on the decline–often due to over harvesting.  You may happen upon a beautiful stand of Angelica in the mountains and only harvest a small amount, make good offerings, and think you have been walking in a good way.  However what you may not know is that this is a stand that a local indigenous healer has been tending to, sometimes for generations and you have just taken their medicine.  Developing a relationship with a plant community over several years allows you to notice if it is being tended to and harvested by someone locally.  If someone is already tending to it and harvesting, you know this is not the place to harvest.  This is also a great way to develop and deepen your relationships with the plants and your relationships with the land. 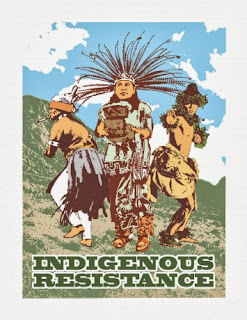 Art by Melanie Cervantes and Jesus Barraza at Dignidad Rebelde

4) Support Indigenous Struggles for Self Determination and Liberation

Contrary to what many history books want you to think, Indigenous people are everywhere.  In California, there are many tribes who are struggling to get their land back and to be recognized by the government as Native Peoples once again.  Struggles around the protection of sacred sites are common throughout the Americas.  Health challenges connected with economic disparities and colonization are common.  Learn about what efforts people in your area are involved in and figure out how to be in support of these struggles.

For folks here in the SF Bay Area, The Sogorea Te Land Trust is an urban Indigenous women-led community organization that facilitates the return of Chochenyo and Karkin Ohlone lands in the San Francisco Bay Area to Indigenous stewardship.  One way that you can support this organization is by paying your Shuumi Land Tax.  This is a voluntary financial contribution to support this important work.  If you don’t live in the bay, consider the spirit of Shuumi and regularly donate to indigenous led efforts to return the land to indigenous stewardship.

The West Berkeley Shellmound is the oldest sacred site here in the bay area.  The last remaining undeveloped portion of this heritage site, held sacred by the contemporary Ohlone community, is now at risk of being obliterated by a proposed retail and housing development. The 1900 Fourth Street project would tower six stories high and excavate two acres of land for a basement parking garage. Ohlone family bands have joined together in steadfast opposition to the desecration of their sacred grounds and are leading a broadly-based community campaign to preserve the land.  Follow @savetheshellmound for regular updates on how to get involved.

Don’t live in the bay?  Look into what’s happening in your area.  Find out who the first people are of the land that you live on and research and reach out to them to learn more about how you can get involved.  Worried about stepping on toes or messing up culturally.  1) you will–be humble and be open to feedback 2) read this piece I wrote a while back about considerations for non native people in solidarity with Idle No More

Indigenous Women are victims of some of the highest rates of violence and murder in this country.  Police are overwhelmingly non-responsive and sometimes the perpetrators of this violence.  Colonization and racial violence are at the root of this epidemic and there is a powerful resistance to this violence spreading across this land.  Get involved with local efforts to support indigenous women through the Missing and Murdered Indigeneous Women‘s movement.  Women’s lives are on the line here.

Taino Indians Counted out of Existence video posted by Alex Zacarias
Brief history with interviews with Taino people about the struggle for their indigenous identity to be recognized.

Article at Indian Country today about the Legacy of Columbus

Genocide of the Mind: New Native American Writing.  Edited by MariJo Moore
A compilation of writings by First Nations people about genocide and current struggles for liberation

A Violent Evangelism: The political and religious conquest of the Americas by Luis N. Rivera
An exploration of the legacy of genocide 15th and 16th century and the work of Bartolomeo De Las Casas and other theologians who documented some of the early horrific acts of genocidal colonization in the Americas, particularly among the Taino people.

A Peoples History of the United States by Howard Zinn
A more comprehensive approach to viewing the history of this land.